The Sanctions Decade: Assessing UN Strategies in the 1990s 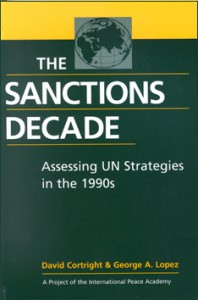 “The end of the Cold War brought with it a new willingness among the once contentious superpowers to use the Chapter VII instruments vested in the United Nations Security Council as the peace and security mechanisms originally envisioned in the UN Charter. The breakthrough in international cooperation also led to more frequent use of coercive economic sanctions. The utility of the sanctions instrument was tested early in the era when Iraq invaded Kuwait on 2 August 1990. Within four days the Council adopted comprehensive trade and financial sanctions that by December brought the Iraqi economy to a virtual standstill. The sanctions decade had begun.”